The day started off a little crazy.  There was a parade on Jefferson and Battle of the Bands at Ford Field.  Parents were calling to let us know that they were sitting on the off ramp trying to get to the gate.  Kids, organizers, coaches and about a thousand band kids and parents were trying to make their way into the building.

There was one person who was so mad that her mom dropped her off she wouldn't talk to anyone. There were shady looks and plenty of pouting. By the end of the night she was all smiles and gladly admitted she was wrong.  Another parent came up to one of the organizers and thanked her profusely. He said that the kid who came out the door last night was a totally different kid from the one he dropped off. Today, she's being sought out for her design skills. 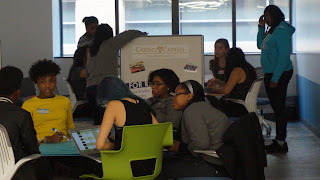 The kids have been encouraging and supportive. They recognize others' talents and bring them out with cheers and smiles.  It's free love without the drugs, sex and rock n' roll.  Well, there is music. And books. And washing machines. And toys. And paint.

The businesses that these kids have come up with are amazing.  They are working together to make an idea that started at around 11:00 AM this morning to take shape. They are throwing words around like validation, market research and revenue streams as if they were seasoned executives.  People are making phone calls to companies, surveying possible customers and creating prototypes.  And it's only 5:30 PM. 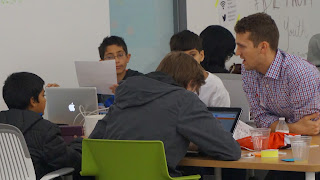 Stay tuned for more updates.  It's going to be great.